What did Tata have that everybody was loved by him? He was heard and was seen because what he used to do was to enjoy with these two very alert senses, common people and intellectual, neighbors from Jesus Maria neighborhood, where he lived for so many years and doctors from Miramar and he never let anyone different behind. But the most interesting of the case is that this phenomenon not only happened in Cuba, it didn’t. There was no “Yuma” who can do resistance. That’s the way thousands of press cuttings that the musician kept show so badly, witnesses of his successful performance on the stages around the world.

He came to succeed from Güines

We don’t know if the success from predicted by the fortune shells or any fortune teller. The fact is that the little boy was born on June 30 th, 1930, named as Federico Aristides Soto Alejo, gave a name to his small country of international borders, Güines.

Maybe the sound of the impromptu bongos, made by childhood innocence and besides of course, with sausage cans and condensed milk modeled a different ear, a unique way to get sounds out. Many years later his interest on music would take him to be part of the different bands from the black societies. And he got to Havana, the great capital, to settle down in Las Yaguas, a neighborhood with a strong poverty and marginal life, but with an impeccable rumba sense. At the age of 15 he admired Chano Pozo; he tried to impersonate his performance and the way to get out the sparkling from the leather drums, above all from his immortal songs Manteca and Blen blen blen. 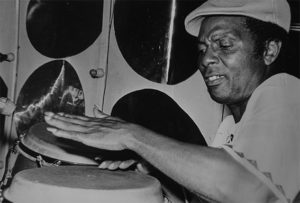 Getting the sounds out…

Tata was unlucky to get paid badly because of playing a percussion instrument like the drums. What a paradox, folks! The ones who kept the rhythm, the shining of the melody, the ones who beat time had to give in and to be less than the trumpet players and pianists.

No percussion, has there been Cuban music? Tata wondered. From this point, his laudable purpose in life: doing the percussionists some credit to the highest standards. I firmly think that the time admitted he was right. Looking for his “oreganos” (the money) he did everything: he took his drums with him around Havana, he was as a temporary band member in some bands, and he played anything: güiro, timbal, bongo, the harpsichord, the double bass…and even he dared to sing. In one of his Havana hectic times he met his idle Chano Pozo.

Chano had more vigour than technique…

Tata confessed. He was a good improviser, had charisma, he connected with the audience, he was a maestro, but rude in the sound. Maybe the biggest of his attitudes was his creativity. He always stood out over the neighborhood rumba players, in Cuba, as it’s known; they were and are a legion. Unforgettable for Tata was the overwhelming conga along with Chano with “Los Dandy de Belen” carnival group, from the seafront, crossing Prado to Monte Street, everything without stopping to play and with the drums hanging from his shoulder.

That’s the way Tata was called by the music critics of this cosmopolitan city. With all the strength of his youth, he launches himself to play and be a member of bands, projects, he plays in the popular Broadway dance floor, The Palladium, even Benny’s request, he agrees on following him in the percussion during 17 unforgettable days. He played at The Waldorf Astoria hotel for rich people, and he started in his maturity of his artistic life, as a soloist. He took until the last drop the jazz effervescence of the city, accompanied Gillespie’s musical discharge in the early mornings, Maynard, Chico Hamilton and without doubt, he left his legacy.

For Tata the amount of drums which a percussionist can have a “solo” wasn’t important, because he boasted about recreating with two the senses of five.

The matter was about to take advantage from the different tunes of the drums and know how to combine them, no matter the amount. Tata played during many decades with the same drums, made by Vergaras brothers; with cured oak of barrels of Spanish wine, (someday the incredible Cuban luthiers would be told).

Many times these instruments were about to be bought, believing that the magic “stated” in the drums and the technique could be made with mere discipline, but Tata was never conceived without them. With the passing of the years, he mended the patches himself, painted the wood. He used to use the leather of an ox on a drum, on the other one of a cow “Male sound and Female sound” and Tata Güines’s mysteries began.

Every maestro has his notes 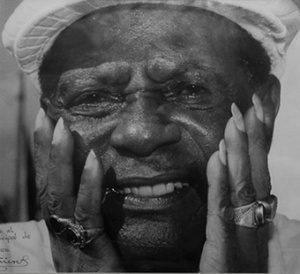 Tata Güines took to his grave so many secrets!

Tata kept many things and secrets to himself. He used to say that anybody who liked could discover his technique, listening to his recordings, so everything was there. Nevertheless, he gave some clues:

I remember the TV programs in which Tata Guines was on. What caught my eye so badly were of course his hands brought out by the white lights of the TV studio. His hands were full of jewels, well-cared nails, that he also used despite the criticism at his first start, to scratch the drums or to brush them, according to the case and to take out the most incredible sounds. But I’m sure, that the biggest of his secrets rests in peace with him.