The Macorina, some lines made by music

A common farmer woman from Pinar del Rio provoked a shock in Havana in 1917 when driving a red convertible, maybe from Hispo-Suiza trademark, went around Prado and Malecon, becoming the first driving woman in the Cuban history. However, her major relevance, in this world case wasn’t for that unusual event, because of a popular composition sung by the Mexican singer Chavela Vargas, with Alfonso Camin Asturian poet’s lines dedicated to the to the Cuban girl, who became famous overseas. It’s necessary to point out that before Chavela sang her version, this song was a hit in Cuba by the voice of Abelardo Barroso, although with a very different lyric. 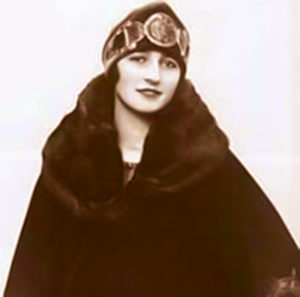 The Macorina in her splendor

A witness in those times, Sr. Segundo Curti, who was a minister after during the so called “authentic” governments of Grau and Carlos Prio’s (1944-1952), recalled in a conference like the daring girl in an almost daily way, she used to take a walk in her car, from 5 o’clock in the afternoon on a wide and busy area of Havana. The trip began on Malecon to Galiano, after that Dragones, Prado and Zanja to Infanta Street and there in front of a leafy tree, she turned around and took the other way round.

The musical song takes the title The Macorina, nickname named to the girl who we’re speaking about, María Calvo Nodarse, according to some by a verbal misunderstanding. An afternoon she was taking a walk so pleased in her car in front of The Inglaterra Hotel, someone said: «There the Macorina goes…!» the confusing tongue of a fan who had drunk too much, betrayed the subject, who really meant The Fornarina (1884-1915), then an outstanding Spanish and popular cupletista because of her records.

The data of Calvo Nodarse was involve into the mystery that the mythical personalities of that time distil, although the most spread version is that her arrival to Havana was with a heart-throb man hand in hand who she split later. Up that moment the girl elbowed her way due to her beauty.

With a lot of intelligence and grace, she wasn’t a vulgar street trotter, but a prostitute of leading standards, compared to the styles of the escort girls from the ancient Greece, and in the performance of this old job, she rubbed shoulders with known people of the society. She got to be José Miguel Gómez’s mistress, before and after he became the president of the republic.

«Most than dozen men surrendered to my charms, full of money and begging for love», confessed the journalist Guillermo Villarronda, in an interview published in 1958 in the Bohemia magazine.

And the truth of her previous statement is, according to friends, she got to have 4 mansions: on Calzada and B, on Linea and B, on Havana and Compostela and on San Miguel between Belascoain and Gervasio, all located Havana downtown. Besides she was the owner of some racehorses, she had very expensive furs, valuable jewels and money in the bank, apart from the monthly money that she used to send to her relatives who lived in another province.

Jose Miguel Gomez’s death in 1921 and the world economic crisis of 1929 were the announcement of her bankruptcy, when the ruins of her protectors and the competence of younger figures, made her sell all her properties.

Everybody was in love with her…

The first song dedicated to the Macorina character was sung by Abelardo Barroso, as we explained already, with Antonio Torruella y Pérez’s lyrics, accompanied by Sensacion Band, and where the mythical Los Parados café is spoken about, on Neptuno Street:

«I know a neighbor who’s got me excited

I heard that she’s called The Macorina at Los Parados.

That she’s the great Macorina»

Locally the song was a hit and went beyond the borders.

That watching your very tiny waist the sugar canes lied down on the way to be ground like if you were a sugar mill.

Your mouth a blessing of ripped guanabana, and it was your tiny waist

The same from that danzon.

After dawn, my arms carry you and I without knowing

what to do of that woman smell of a mango

and new sugar cane with the one you took me to the hot son from that danzon.»

The visit of the Mexican Chavela Vargas to Cuba, it was a right occasion for the two women made a close friendship. Loving to make a tribute to the beauty of the young girl, the singer used Camin’s lines with the same chorus of the song that was already a success in Barroso’s voice. This time the song became an international hit. It turns surprising that the singer had made sure for a long time that the lyrics had been taken from the folklore when it was totally untrue.

When he heard about this lie, the poet Camin, when he had the chance to meet Chavela, gave her a couple of hits on her rips to make her recognize her merit, and she did it for some time, until the bard died in 1982. From that moment Chavela went back to her old ways without knowing the real creator of the text.

«Macorina I’m taking you with me around the world. You’re going to go around from my hand lots of sea and far lands. I told her and she smiled. Who knows if in that moment she believed me, certainly not, but she lived the time enough to realize that I kept my promise. When she died, in 1977, my Macorina already had gone and come around the world».

The Macorina, nickname she hated till death, on June 15th, 1977, alone, poor, almost forgotten in a humble Havana neighborhood.