Saying Juan Formell sounds so familiar and significant, that transmits us the sensation to be talking to a person well close and loved. After more than 40 years, leading the Van-Van band, he had the matchless gift to understand in a clever way and at the same time deep how Cuban behave on their everyday life, and transforming that phenomenon into an artistic work that’ll last forever, like a pleasant testimony about how Cuba was during some decades.

Times when Cuban used to burst an enthusiasm marked by the authenticity and hope, at the same time that the society faced big challenges, in which his songs put some joy and a lot of heart in to the hard chores imposed by the daily life. One of his biggest virtues is related to that humorous vein able to solve funny complex situations and more than that pretty tense.

During the different stages of his creation many experts have defined him like a surprising philosopher from the popular slang, able to give form and order through the lyric-melody fusion to the thought of diverse social groups and discover the common denominator between people that can seem very different, what I dare to define like a sensible way to the Cuban enigma. 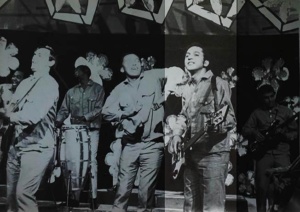 His extraordinary gift to handle a series of phrases that can be constantly said on the street, and somehow they mark the identity of the different urban areas were being fruitful in legendary songs sung and danced by thousands and thousands of followers. Among so many phrases that passed to be great success of his band are found: “Nadie quiere a nadie”, (Nobody loves anyone), “Los pájaros tirándole a la escopeta”, (Birds shooting at guns), “Te pone la cabeza mala”, (Your head gets crazy) and “Ay Dios ampárame”, (Oh Lord, protect me).

Details like that one able to close how women walk dance and behave on this island, appears in a memorable song in his so called “Por encima del nivel” (Over the level), more known between the dancers “La Sandunguera”, performed by Pedrito Calvo, one of the leading voice of the group. Incorporating the right sounding color to his sticky lyrics is another of his great senses, having the clarity to give all the necessary attention to the singular of the Cuban son, won by him through the period of his training, and constitutes one of the most prized elements who those running through the blood who were born here.

In this sense the most exciting of the marriage between Formell and his people is the process where the musician gets a series of keys of wisdom and the popular expression and after the society makes it of their own what he’s changed into art putting it into work in stages of the public life as the private one. His folklore is shown so spontaneously as his own existence, reaching remarkable spiritual and identity values.

The treatment of religion in his music also gets a special role; Formell tackled the subject with grace and respect at the same time, catching from that point of view a whole audience. As a funny fact we can say that the Van-Van was founded on December 4th, 1969, a day in which one of the most intense religious celebrations is held, St. Barbara or Chango.

One who had the opportunity to talk more than one occasion to Formell, turn us out exciting to discover how his own biography took a leading role in his musical work. He often used to tell about his mother’s cuisine passion and somehow he inherited this call that makes easier a closer contact with the popular preferences in the creole food. The ones who are over 50 or get closer, haven’t forgotten a song of his that was a hit and in some occasions it was made real in our kitchens, such a song is called: Échale calabaza al pollo (Put in some pumpkin the chicken).

When he said goodbye on May 2014, the maestro left an expressive legacy of indisputable richness, the common people’s testimony that can be brilliant. People like his own barber, even an anecdote of his, when someone arrived hurrying him to have his hair cut very fast, this one responded him: Don’t be wrong, the roach has antennae, but it’s not a TV”.