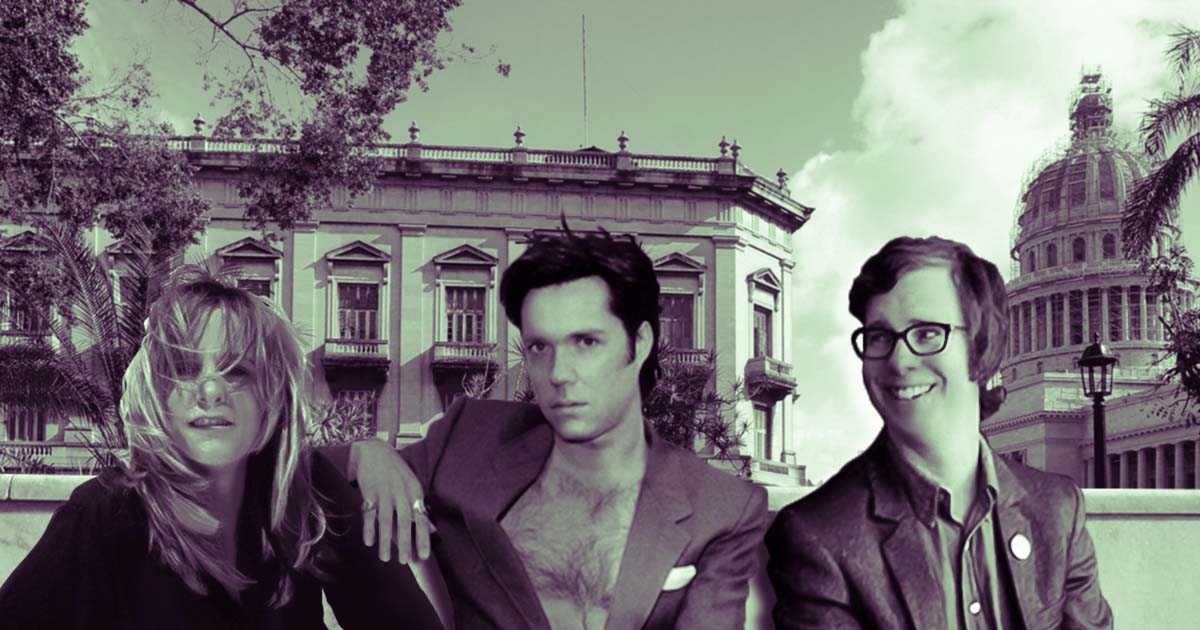 “How times change, Venancio how you think…” Done to a T of these years seem to be the chorus of and old and sticky song from the duet Los Compadres. The arrival of American tourists to the island doesn’t stop, and the entrepreneurs continue seeing in this fact an amount of indisputable interests. In a panorama made by the uncertainty of some months ago, the laziness of the current Trump government under the check of the politics towards Cuba, allows to speculate that if the relation between the countries is not going to better off anymore, it won’t be worse either.

Some web sites dedicated to the so called “Industria del Ocio” (Leisure Time Industry), like the Condé Nast Traveller’s and of music, mainly of the Billboard and Rolling Stones magazines that echo an opinion of a fact so unusual as true. Three stars from the American pop rock will come to Cuba like “tour leaders”. These visits will try to cover as possible and during four days, some more emblematic, colorful and why not? “tourist”aspects of the Cuban culture. For the design of every of the excursions, the American side, Music & Arts Live, has been assisted by the Ministry of Culture cooperation and the Cuban Institute of Music as well. However, as far as we know any official media of the island has spread the news, despite the first of these meetings will be this same May.

Where are the singers from, or even better: who are they?

Well they’re three and from solid careers: Ben Folds, Melissa Etheridge and Rufus Wainwrigth, all American. So much known or if they aren’t, we suggest you to read these brief biographical reviews:

Ben is considered one of the most influential musicians of his time. He’s been more than a decade sharing stage with the most famous symphony orchestras, as Sidney, Australia, Kennedy Center, playing with them his pop hits and also his claimed Concerto for Piano and Orchestra. During five seasons he was the judge of the popular NBC show The Sing Off, which catapulted the taste for singing a capella in the country and helped to launch the careers of many groups that opt for this variant of the musical interpretation.

Folds has some pop albums, in charge of the Ben Folds Five band, multiple rock records in solo and unique cooperations with artists of the prominent Sarah Bareilles, Regina Spektor, Weird Al and William Shatner. His most recent CD is a mix of rock and classical music, which during weeks was on the Billboard list for this last category.

She bursts into the rock American scene in 1988 with his debut album, the one she entitled with her own name. However is with her fourth CD Yes, I Am, 1993, that got her most heard hits and wins a Grammy award. In 1995 her CD Your little secret bursts into toppest hit lists, and it opens the way to get the Songwriter of the Year Honor in 1996 from the ASCAP Pop Awards.

Well known by her confessional lyrics and of a peculiar voice, husky, Etheridge is one of the favorite American composers and singers of the last decade. In February, 2007 her song I need to wake up, song of the documentary of Al Gore An inconvenient Truth, about the climate change, wins the award of the film Academy in the best song category. Etheridge recognized in public her lesbo sexual orientation at the beginning of her career, in times that wasn’t so easy to make that kind of confession. In 2004 she was diagnosed breast cancer and fought the disease so successfully.

Praised by the New York Times for his “genuine originality”, he’s gained the right to be considered one of the greatest vocalists and composers of his time. Born in New York and grown up in Montreal, so far he has with seven studio albums, three DVDs and three live concert recordings.

He’s received among others, the awards Juno for best alternative album and has been nominated as the best composer of the year in 2008. Besides he’s composed music for dance and he keeps work relations with talented artists like Elton John, David Byrne, Boy George, Joni Mitchell, Pet Shop Boys and the producer Mark Ronson, among others.

It’s so fair to say that his interest is not only to the pop style, also his work in the classical music is well known too and his successful opera Prima Donna has been represented in many theatres of the world. He hopes to open his second opera, in charge of the so called Canadian Opera Company, on October 2018.

Havana in all color

The web sites dedicated to upload these events call people of all ages, interests and tastes to participate. The tourists/fans who take this call and come along their idols in a Cuban adventure, are going to be lodged in the sumptuous Meliá Habana Hotel, and they’ll have to pay, according to the chosen room, prices in the range of 2699.00 to 6299.00 dollars. This fee includes besides lodging, the right to private and public concerts, interchange meetings with artists, city tours, some food and transportation.

The particular interest of every singer gives a distinctive label to the activities to do, as the names of every excursion suggest:

“Ben Fold’s Havana Getaway”, 4 days and nights of music and photography with Ben in Havana. Being celebrated from May 25th to 29th, 2017.

“Wainwright Libre!” 4 days and nights celebrating with Rufus and his friends the sounds and Havana sights. From September 21st to 25th, 2017.

The common denominators of all will be some of the MUST of all who get to Havana: visits to museums and the most important cultural Cuban institutions, city tours on convertible cars, tour throughout the historical center of Old Havana, cigar and rum taste, salsa and rumba parties, taste of the Cuban music, among others.

For their followers, Ben reserves music and photography workshops, with the participation of well-known Cuban photographers Néstor Martí and Gabriel Bianchini, Melissa will be in charge of a music workshop as well and she’ll meet artists and defending campaigners of the women rights, while Rufus will be in charge of the direction of a talk about music at the High Institute of Art (ISA).

Every artist will give two concerts, the first of a private way, only for their tour companion. The second, public, besides their tour followers, everybody who wants to go can make it.

You must be wondering what centers or institutions will be visited by the stars and their fans, the list, according to the organizers is still on a change, this is it:

The stars talk about Cuba: 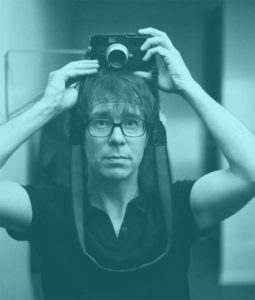 Ben Folds: I think what the Cuban people have reached in music, dance and visual arts is exciting and inspiring

«I’ve always dreamed of going to Cuba. I think what the Cuban people have accomplished in music, dance and visual arts is exciting and inspiring, a complete success. During years I was fascinated by the reach and the spread of the Cuban art and culture, it’s simply hypnotic and amazing…there’s nothing to be compared with».

«My mission on this trip is to discover by first hand, the power of art in Cuba in all its ways…, to see in what way it has been able to influence on the people and at the same time to commit artists of any gender on the effort for a better understanding of the world that is around them». 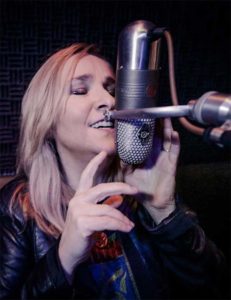 Melissa Etheridge: I find that on this trip to Havana, there’s romance and beauty

«It seems amazing that we can visit Cuba. When I was a child in the 60s, I remember that everybody was talking about this country, a very close mythical place and at the same time so far…»

«I find that on this trip there’s beauty and romance. I also hope to enjoy many things that we haven’t lived in any other place. We’ll have front seat to enjoy of this historical moment from different points of view, in the musical, social, to experience freedom and the change. »

«Something that is important to me, is meeting the LGBT community, with its local leaders and artists…»

«It’ll be very interesting to what consequences to my creation this trip will bring, what it’s going to give me. Lately I find too much inspiration when I begin to see beyond myself. Recently on my album Memphis Rock and Soul, I do a tribute to the classical musicians of soul… one gets to have a clearer knowledge of himself when you are away of your comfort zone». 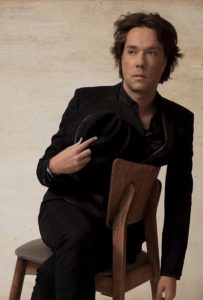 Wainwright: Havana is a city more on fashion of New York than Miami’s…

«I grew up in Montreal, Quebec, people there used to visit Cuba frequently above all looking for its great beaches. I remember when Ry Cooder created Buena Vista Social Club together with Win Wenders in the 90s. This fact made me to focus on Cuba, although I always knew that I was only scratching the surface of a more complex phenomenon».

«The first time I came to Cuba was in 2013 and it was incredible visiting Havana. This city is more on the fashion of New York than Miami’s. The architecture is amazing, majestic, and seductive in all the sense. The people are friendly, inviting, willing to know and very open. I’m very excited by the fact of living all that again».

«I say that it’s very important to be open and being proactive when we share what we are as a society, get involved in cultural interchanges, learning from different people and arising the American reputation to be envoys in any part of the world».

The Cuban who will be together with Rufus are: Carlos Varela (troubadour and singer), Interactivo, Obiní Batá.

If you’re interested in knowing more details about the visits of these American artists to Cuba, followers of others that in some times before they found in Havana the inspiration and the warmth welcome, visit to the websites dedicated to Ben Folds, Melissa Etheridge and Rufus Wainwright.