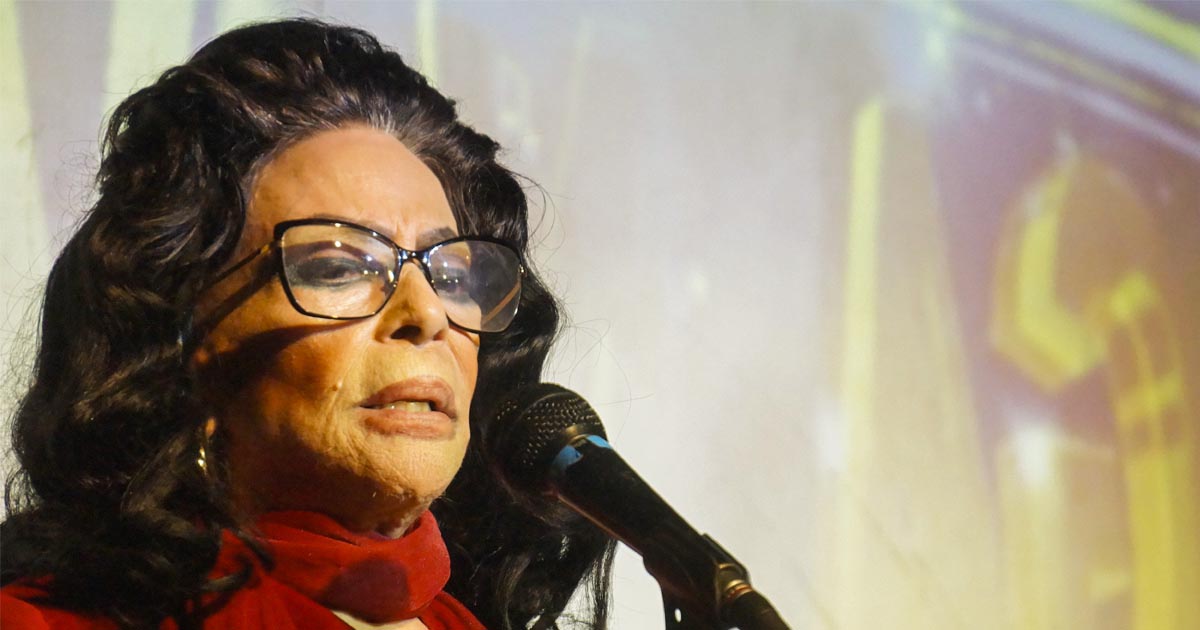 Hot afternoons, weak or strong winters “a lo cubano”, they haven’t been able to stop that this woman, who’s about 90 years old, goes to Las Vegas cabaret every Friday at 4, located on Infanta and 25th, Vedado. There Olga Navarro, poet, actress, like a priestess of the word, not only gives us her creations even she offers the chance to many young people who dream about to become singing and line professional one day as well.

She, the first Cuban woman who wrote and directed a cabaret show, now it’s not reluctant to offer her talent and help to those who approach to her on these dates called Tardes Bohemias (Bohemian Afternoons).

The opening of this place, more than a decade, had the presence of remarkable personalities from the culture world like Rosita Fornés, vedette among the vedette and the writer Miguel Barnet.

Interviewed by a colleague, Navarro expressed her happiness and didn’t doubt to confess that she among other things is a cabaret woman. 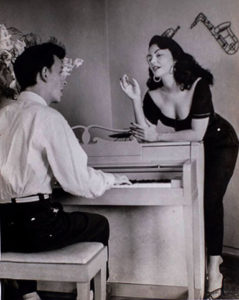 Olga Navarro and the composer Frank Domínguez in a perfect song-combination: music and poetry.

When I personally met Olga Navarro, on an interview made in her apartment, I was impressed not only for her beautiful look even also for her vast content of her work, from her beginning as a model on TV to her leading role in the play Media Noche en Paris, at The Montmartre Cabaret.

Her training desire took her to take drama classes with the professors Hortensia Guzmán and Alejandro Lugo and body language and dance with Jorge Harrison, simultaneously with her performances in cabarets and television, under the expert hands of Condall, Garriga, Amaury Pérez (parent) and others.

From her work as an actress we can stand out that she founded with Idalberto Delgado and other outstanding actors the group Teatro-Club and in 1980 founded the first poet musical group of the country “Aché de Cuba”.

The poetry and music, together with her narrating gifts, make the vast creative world of this woman.

In 1956 she published her first book called Versos and at the following year her second volume called A ti, with 36 poems, reprinted in 1962 and 1964.

She’s travelled to some countries from America and Europe. Spain printed her poems La Flor Erguida, by the Graphic Arts from Madrid and Ser mujer y Poeta, by the Ponton Caribe Editorial, with Miguel Barnet’s prologue and Zaida del Río’s cover.

Line made a song

On her poetical work, according to her own confession, it doesn’t keep to any special metrics and she loves to write more modern and free poems, «Without losing the musicality ever, precisely that’s why I think that my work has been so played.»

This statement is true if we analyze the amount of her poems played by great figures from the composition, starting with the so popular Estoy aqui de pie, with music of Fernando Mulens and sung by the unforgettable Elena Burke, o Te dije quédate, No te quejes, Mi Habana, La dicha también hace llorar, played by Meme Solís, to Cenizas quedan, Leyenda Habanera and Tres días sin ti, Alina Torres’s music and no less remembered Con mi Soledad, Déjenme llorar con él, Ese banco del parque, Hola!, ¿Cómo estás?, Eso no lo he dicho yo, taken to the stave by Juan Pablo Torres. Omara Portuondo made a remarkable version of this last song. Also Olga forayed into the difficult world of the children song with success.

On stage of the cabaret Las Vegas, the amazing figure of the hostess Olga Navarro walks with elegance. As we wrote at the beginning of the article, Friday afternoon is the right one for the meeting of the artist with his usual and loyal audience. She delivers, like she always did, poems and dreams, she presents young figures and applauds those who stand out in the show. Tardes Bohemias is today one of the most popular gatherings of the Havana gay world. 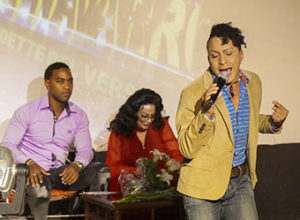 Tardes Bohemias is the name of Olga Navarro’s show in cabaret Las Vegas, where she receives young singers.