Migdalia Hechavarría, the voice of feeling

Barely some meters from the Woods of Havana, downtown 23rd Avenue, Vedado neighborhood, the cozy apartment where one of the alive legends of the Cuban music is located, the super charismatic Migdalia Hechavarría lives there.
Since our conversation started, I discovered that every single word of hers had the weight of the memory and emotion.
Born in the always missing Santiago de Cuba in 1941, we’re surprised by her vitality, and her disposition to share the great experiences of her professional career with the youngest. Being the outstanding Santiago man troubadour Angel Almenares’s granddaughter, Sindo Garay’s friend, shows with pride her pass through the different stages, and feels a great satisfaction about the preference that Gabriel García Marquez experienced with her, who he reached to have a nice friendship. Making myself like in my own house, I began with the questions.

Tell me about the call is discovered in you, and the beginnings of your artistic career.

I began my career in Santiago de Cuba at the age of 7, in a competitive childhood program that was broadcasted on the Radio Cadena Oriental and it was called “La pandilla cabeza de perro” (The dog’s head gang) that referred to a very popular beer in Cuba at that time (1948). The first song I sang was Frutas del Caney and I won the first place. After I was part of a trio with classmates from school, we called it “Las Tres M” (The Three M): Marcia, María and Migdalia.

At the age of 13; I reached a singing radio contest called La escala de la fama (The scale of fame), in 1954, from that competition La Lupe also succeeded. I was among the three first awards, La Lupe and Manuela Cobián, from that moment my work as a professional began, that hasn’t stopped until today.

What can you tell me about your arrival to Havana in 1958?

I remember my first performance: it was at The Sevilla Hotel, in the Piano Bar, I was lucky because I worked with Bebo Valdés at the piano, Cachao in the bass, and Rolando la Serie in the drums. When I installed myself to sing Bebo told me: “Come here mulatica, where you came from?” and I replied that grandmother used to live in Santa Amalia, and she was practically his neighbor. Bebo made an impression because of his mastery that he did with everything.

Later and accidentally I got to the Cabaret Morocco, located on Neptuno Street, where I shared the stage with Barbarito Diez. After I went to Varadero, among other presentations there I recall that I sang with Benny Moré at the Oasis, I presented as well at the Caguama Hotel for some time, and The Continental Cabaret at The International Hotel of Varadero together with Meme Solís and his quartet.

“When I perform, I give myself in”, the singer says

What composers do you prefer to interpret?

From Cuba José Antonio Méndez and César Portillo de La Luz, with him I shared a lot at Gato Tuerto. They’re the chosen when I mean to bolero form, from the soneros I prefer Miguel Matamoros. If we talk about the foreigners I have three great passions that are: Armando Manzanero, Agustín Lara and Juan Gabriel, I admire them for those big boleros that remained, singing them is life itself. Piensa en mí by Agustín Lara, it’s a flag wherever I arrive.

Can you give your opinion about the current Cuban music state?

I think it’s a good moment, but I think that the secret to go forward and keeps alive is not to betray its roots; an example of it is Tradicionales de los 50 project, because night after night we have an excellent audience that comes from everywhere. An interesting point has to do with the high profile that the son has recovered inside what it’s doing. The undeniable is that Cuba is a school of spectacular musicians, and the most important is being able to be in the real value of our music.

Which are the contributions that Tradicionales de los 50 project has done to your career?

In 5 years I’m in the project, the most important contribution is to see the reaction of the people, they’re people from different places who speak different languages… See the way they enjoy it is so wonderful, and then you say: They feel what we are doing!, that’s the mystery of the Cuban music.

What does the night represent to you?

The night is my life, I can’t stop singing… in my night as I told you, the Gato Tuerto has an important position, there my show last according to what the public prefers, one, two, three hours. I make myself as a company by a piano, percussion, a guitar-three and the bass; I’m always the one who ends the night. 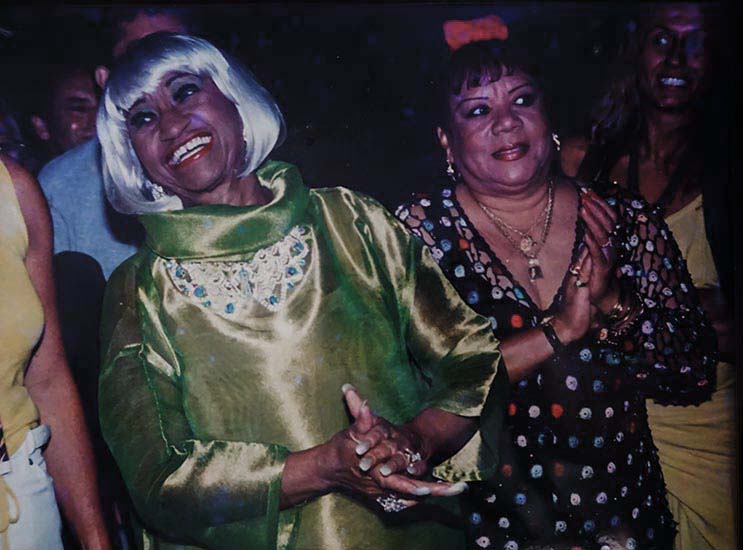 “One of the best memories of my career was being next to the queen Celia Cruz”, (Migdalia Hechavarría)

Migdalia, I want you to tell me about your major works

Well first of all, when I arrived in Rome in 1998, I was so afraid because it was a stage I’ve never been to, and to my surprise it was spectacular. I also want to mention my performance as the first figure of the Tropicana Cabaret and the seventeen years at Parisien Cabaret of the remarkable National Hotel of Cuba.

How have you felt being the envoy of the Cuban music in some many places of the planet?

I have felt so happy because lucky me, I’ve always been very well welcome. I’ve been at the Jazz Festival of San Remo twice, the first time in 2000, running into Chucho Valdés at the same night in 2003. I remember other stages like the Fair of Malaga, Barcelona and the performances in Norway, Sweden, in Mexico in three opportunities. Colombia, Panama, in Spain several times, and in The Bahamas among others.

Of those glories of the music you have shared stages with, do you feel special admiration for anyone?

Oscar De León, I admire his great simplicity so much, and I appreciate the affection he took me to present me in his show. It’s impressive his spurt of energy and his great sense of improvisation on stage.

“Oscar is a great admirer of the Cuban music”, (Migdalia Hechavarría)

What do you think about that mystery of the improvisation within the Cuban music?

It’s innate and it comes out, you don’t think about it, you sing and you plot, the greatest improvised so much and left that legacy behind, that has successfully spread in many places and among different singers.

How’s the future for Migdalia?

The future for me is to go on singing, which the public loves me, although I’m not so famous I have an audience who goes to the shows because of me, it’s a different audience of all ages. What is about to come is the continuation about everything that I have lived so deeply and it’ll be welcome. As I said, I’m a daughter of Yemaya’s and she rules this future that I face with no fear, and I’m sure that it can still offer me a lot of satisfactions.