Meme Solís and his new dawn

From the Peruvian poet Cesar Vallejo, these are the lines: ‘…he was hit hard with a stick and hard with a rope without doing anything.’ The main character of this story could have been the inspiration of this line.

A few have left a mark so deep in the Cuban music like him and not a few have suffered the years of silence and agony like Meme Solís.

Composer, singer, show producer, he paid a large sentence, according to some of 18 years, before he was given the current exit permit in his years of “inxile” in the land where he was born.

All began when he decided to leave Cuba one day after a season in which a curtain of silence on the national radio station and television was spread, in a moment he enjoyed the biggest popularity among the Cuban quartets… but everything has a start.

Although he was born in Mayajigua, Las Villas former province, his parents moved to Santa Clara and at the age of 6, studied music at the Rita Chapú School of Music of that town.

It seems that his first confrontation with the audience was at the age of 14, with the absent of a piano player, he was asked to join Olga Guillot and Fernando Albuerne who were going to sing on the opening night at the Cloris movie theater, located downtown, across from Vidal park.

Santa Clara also witnessed of the creation of his first quartet, made up of just women, by Osiris Aguilar Valdés, Lila García, Bilín Cabrisas and Francis Domenech. Directed and accompanied at piano by Meme, they performed at the famous Venecia cabaret in that town then.

Before the insecure situation living in the country, and somehow in the Central region, the band is broken up.

He is taken to Havana by Fernando Albuerne, Gaspar Pumarejo, founder of the Cuban television, baptized him with the artistic name Meme, like his sisters used to call this young talent. Here he reached to record a long play record joining with Elena Burke called La Burke canta. Here he shows his composing paws including hits like “Que infelicidad”, “Para seguirte adorando” and “Es una verdad quererte”.

He joins the most outstanding figures of those times but not used to sleeping on the mattress of success, he launches himself what it would be the most popular quartets of all times: Meme Solís’s Quartet.

It wasn’t easy and like many bands, they had their ups and downs due to the members, most of all at the beginning. But Solís’s creativity made that the changes didn’t affect the quality of his songs.

As Meme´s fellow country-man, I came to Havana in 1963, although I didn’t begin to write about the farandula until 1965, he was indeed an admirer of the quartet and Meme particularly, who he used to hear at 11 o’clock on the radio, together with Elena Burke and Luis García, in the program A solas contigo, that lasted about 20 years on air.

He was done a few forays in the artistic world but when I began to write, I remember that at International Song Festival held in Varadero in 1967, my colleague Carlos Franco, Peroga, photographer and the one who subscribes, chose his quartet like one the three artists most popular of the Cuban representation. The other two were Elena Burke and Miriam Ramos.

I can’t specify when over the artist and his group, the veil of silence covered them. It wasn’t anything written but we all knew and obeyed with a better cause discipline.

In the blurred memory that years last, I think in that time, the Central de Trabajadores de Cuba Theater, opened its doors for three weekend concerts, they were a total sold out hit and too many kept without a ticket, despite the poor advertisement.

The human beings have a limit and Meme saw that personal blockade that stopped him to be present in theaters, cabarets, radio and television and decides to ask permission for leaving Cuba in 1969.

As a punishment for that personal decision, he’s sent to work as a worker in a factory of cardboard, waiting for the permission to leave the country that wasn’t given 18 years later, responding to Felipe González’s request, president of the Spanish government then. 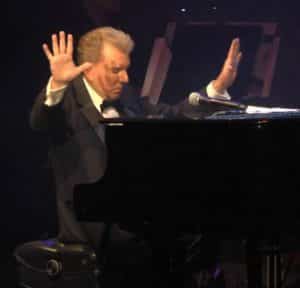 His music not on the official media anymore, but in some enterprises’ activities, continued to be listened to.

It’s truth that there were art working partners who stopped treating him, there were other who kept the friendship and even sang some of his songs, among them Rosita Fornés and Elena Burke.

He was taken out of the factory and he was like a kind of assistant of the shows that were given in the beaches of the East, and even he was a member of Los Cuatro quartet, until today it cultivates a great part of its repertoire and even sang in dance floors and theatres but the radio press, written and TV one, couldn’t echo the opinion of those presentations.

Like a boomerang for those who wanted to condemned him to the ostracism, on January 5th and 6th, 2013, at the America theater of this capital, a show titled Otro amanecer was held with the music of Meme Solís and the direction of Raúl de la Rosa, a complete sold out hit, with people of all ages during the two nights.

What it’s done a dear host of the men’s heart; nobody can snatch and from his detractors, nobody remembers anything.