Mambo was on the air…

A musical revolution started to take part at the end of the 30s and got its biggest splendor during the 50s. It had many intellectual parents but only one consolidated it internationally, so much that Marcello Mastroianni, the famous Italian actor, enjoyed its rhythm in “La Dolce Vita”…

Sometimes there are times that in the musical development of a time some elements converge that for tradition and “fashion” reach to reinforce in the popular taste.

It happened with one of the most international Cuban rhythms from the 40s and 50s, the Mambo.

On an early date like 1937, Orestes Macho López signed already a danzon named “Mambo”, with a fourth part that musically responded to the “mambeados” canon. This “new type” danzon was taken into consideration of the respectable by the Orquesta de Arcaño y sus maravillas, but incredibly by that time, “The miraculous blind man” Arsenio Rodriguez was testing on his side and more testing with a form of his creation, the one he called “Diablo”, with some coincidences of rhythmical patterns with the danzon in question. The polemic was so much by the honors of the creation of this form, that even the pages of the prestigious Cuban magazine Bohemia, echoed the opinion of it in the 40s.

Two were not enough, they were seven

The musicians experienced with rhythms, melodies and harmonies that later would the Mambo labels. According to our point of view, the so called Orestes Macho López and his brother Israel Cachao López, both with Arcaño were already and Pérez Prado with Casino band, Arsenio Rodríguez with his own band, Bebo Valdés, well known pianist and father of the so virtuoso pianist and jazz musician Chucho Valdés, the tresero Andrés Echeverría (El Niño Rivera) and the pianist René Hernández, at that time musician of the trumpet player Julio Cueva’s jazz band. It’s more than proved, as the famous Mexican corridor says “it doesn’t matter to get first, even to know how to get”, Pérez Prado was the artist who made the new rhythm international and for that he did it from many ways.

In Cuba the Mambo was told no…

Pérez Prado, unstoppable, talked some huge prestige musicians to record two sides of a 45 rpm single with the two songs “Mambo caén” and “So caballo”, both with modern arrangements. However the timid Cuban businessmen of the boom didn’t want to take chances, they preferred to bet for sure and this obliged Pérez Prado to leave Mexico, where he received a great help from the Cuban vedette living in this country, Ninón Sevilla, who at those times she was succeeding in the Mexican movies. The first well known songs in Mexico were “José” and “Macamé”, but the real hits were “Mambo número cinco” and “Que rico el Mambo”.

It’s interesting to notice that the foreign vision of the Cuban music tended to classify as “rumba” to all the rhythms from the island(known as many and varied), until the Mambo appeared. Then everything was Mambo, like Cha cha chá afterwards and more contemporary, Salsa.

Shoulders, hips and feet (among other things)

Let’s imagine for a moment that we’re in 1943 at the Tropicana cabaret in Havana; the night that Dámaso Pérez Prado played for the first time live the times of the new rhythm. The people from Havana used to be accustomed to the soft Son and moved but foreign Swing, they must have been astonished before the rhythmic progression of Mambo, with its rapid musical phrases that made the least expert dancers sweat to death before such a big challenge.

So Pérez Prado, against the trend about all the jazz players to bind more the sound of the band, he established some sound levels with two main registers: the upper one, because of the trumpets and the lower, due to the saxes, both in perpetual counterpoint and above all with a striking rhythmical-melodic function. That was the main key of all his liveliness.

The Mambo had many descriptions: wild, modern, sensual…

All these, dressed up by Pérez Prado’s yelling (considered by the members of the band unnecessary at the beginning but definitely turned into a distinctive label of the rhythm in the popular taste) and for the complex figures of his dance, in the 50s he was the absolute owner of the great party salons in New York. If we were asked about the main feature of this dance, we’d answer that is the energy taken from the steps, energy which is underlined and complements with the synchronized moves and alternate of shoulders, hips, legs, feet and hands, sometimes standing out the musical landscape with claps, what makes a hundred percent, sharing with the dancers the song that the band is playing. A new style for the dancing couple was of course the introduction of the tap or puntas in the steps.

The Mambo is…out of this world!

Dámaso Pérez Prado was born in Matanzas, 1916 and died in Mexico (country which sheltered him and succeeded) in 1989. Among his most curious anecdotes tell that he took as a nickname “Cara de foca” (Seal face) labeled by Benny Moré who composed a song (Mambo rhythm, of course) to Marilyn Monroe herself. He was also the first Latin artist to keep 26 weeks on a row on the top on the Billboard chart, the song “Cerezo Rosa”. Of course, it calls the attention that it’s one of the musical forms that has appeared more in the times of his success and also here in some films from all over the world, such as: 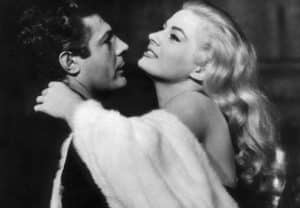 What about you? Do you cheer up to dance Mambo?

Photos by:  www.andina.com.pe and  www.bbc.co.uk