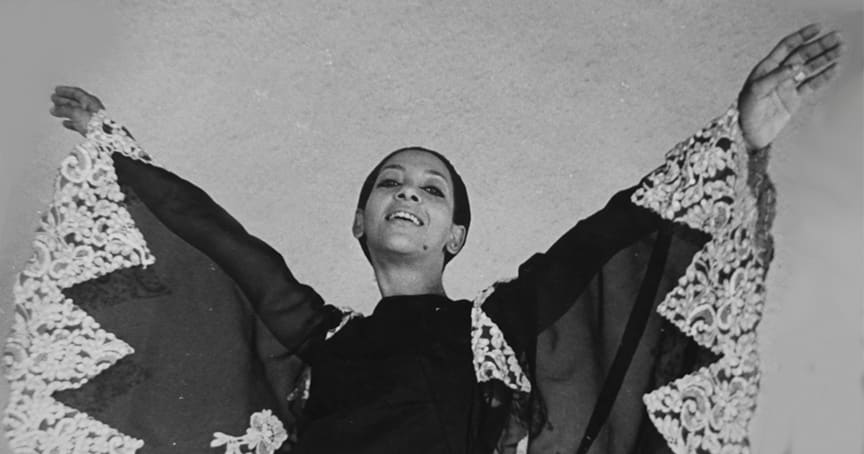 “You dig a grave / and today coming back / you’ll know I’m dead ‘cause of your fake / and already wrecked down / lonely and beaten you’ll cry”, (verse of one of the most famous songs performed by Leonora Rega).

Just a bundle of nerves, a very personal style but related to La Lupe and Moraima Secada in singing, Leonora Rega is one of those singers who deserves to be rescued from oversight so by her couldn’t careless attitude or ignorance, she’s been buried like if we were dealing with a second death.

Her artistic life began very early when she was still a minor and took part in Aida’s quartet to replace the outstanding Elena Burke, who was leaving the group to begin her career as a soloist.

What vocal skills would the girl have to be accepted to replace Mrs. Burke?

Without doubt, at the beginning, Leonora was the echo of the trail left by the “Sentimiento Lady” (La Burke). She realized that she had possibilities too and could be genuine.

Besides, we can’t forget as that quartet was a real school, the one Aida Diestro gave all her know how and from it, voices like Omara Portuondo’s, and the so called Elena’s, Moraima Secada’s, and others would arise.

She makes her first trip together with the quartet abroad, to Argentina and Moraima has to sign a document making her responsible for the minor.

She did a part aside

May, 1963, highlights her debut as a soloist at The Capri Hotel Casino, a place where she made her singing skills shine and gains the audience’s favor where names like Olga Guillot and Gina León shined as well.

Havana at night, and other places from the country, enjoys her presence and she can be seen and heard at The Habana Libre’s, The Nacional’s, and The Internacional’s in Varadero and even in Tropicana’s cabarets.

Radio and television, at those times, witness her constant presence. On the little screen, she appeared in the star programs Juntos a las nueve and Recital, both directed by Manolo Riffat and having Eva Rodríguez animation.

She made a long tour abroad that took the former Soviet Union and some other socialist countries.

It was no free at all when the radio program “A solas contigo”, with Meme Solís and Elena Burke ( Radio Progreso, 10:00 PM) stopped being broadcasted, Leonora Rega, together with the guitar player Cary del Río, were in charge of taking that place.

To a del Río’s song, Leonora’s most emblematic song is there: “Cavaste una tumba”, from which she made a difficult making to master, although María Antonieta, another successful Cuban singer in cabarets and night clubs from the 70’s and 80’s, included it in a record called Sin Límite.

I can’t tell the date but in the 70s, Rega, showed the popular acceptance reached when she offered a recital at The Amadeo Roldán Theater, on Calzada and D, in Vedado. That night the seats were not enough but the audience didn’t daunt and took the halls and stairs, not to miss the show.

Besides the so called Cavaste una tumba, her repertoire included songs like Alma Libre (…like a magician from the East), by Juan Bruno Tarraza, and above all from the composer Carol Quintana, a whole serial like Viviendo mi verdad, Lo que más deseo en el mundo, Que la vida sepa. Also other outstanding composers Like Adolfo Guzmán, Juan Arrondo, Pablo Reyes, Olga Navarro and Miguel Chavéz, offered her some of their songs.

Her last presentation in public was at García Lorca theater. From that moment, a thick layer of silence covered this great figure from the Cuban music like Rega’s second death, in the country that saw her to be born.