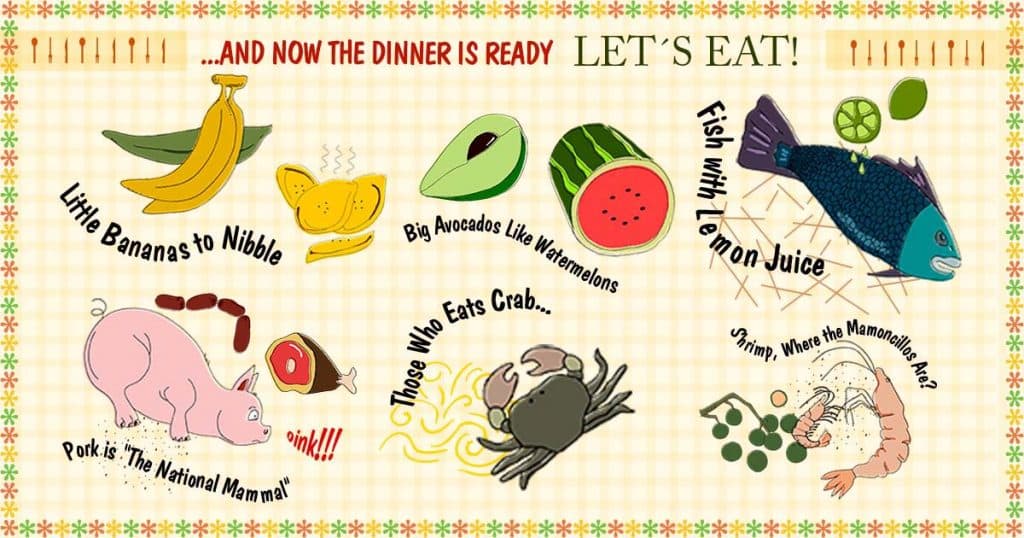 There are two important things in Cuba: music and table. They’re always together. They’re always defining periods. We propose you a journey through the most musical of the cuisine; the Cuban one.

Not for nothing I state that the Cuban nationality, the great erudite Fernando Ortiz compared it with an “Ajiaco”. In his big bursary of analogies, like any other wise man, willing to clarify something, he could have taken another one; but not. Once more, food was the protagonist in this occasion, for defining what we are.

It could be said that the thermometers on this island instead of measuring temperature, measure easy times, less easy and frankly very hard ones of its food history. We aren’t making comments about what it’s not up to us, but we want and we can tackle on this website dedicated to praise the good Cuban music: the relation of the music with food.

Those who preferred things done and of a quick access, had to pay attention to the streets and their street vendors, who were in old and colonial times, almost the first specialists in marketing of those, this island has recognized. Hardly without leaving home, the coolest dish ingredients could be bought, or finished products as well, those through the process of sale could catch the people’s eyes and later the heart. The sweet-smelling and colorful fruits and the kinds of a huge number of creole sweets were sung and shouted for these street vendors going by. The king of the Cuban speeches was the one which used to announce the salty, toasted and hot peanut at bedtime to the housewives. One of its famous singers was Rita Montaner who asked with sensuality and mischievously to enjoy the “beak”, to put into our mouth, what the cones from the time could hide, gigantic compared to the scrawny update proposal.

Mr. Ignacio Piñeiro used to say that after a “bacchanal”, nothing better than replacing energies with a splendid Catalan sausage, crunchy, sticky of brown fat, of a respectable size and not only “delicious and famous” in Havana and its original Catalina de Güines. If you opt for this variant, you’re from a party spirit, enterprising and devoted to the strong emotions, aren’t you? If you prefer an unlike texture of some tamales, (cooked by Olga, even better) of a tender sweet corn, seasoned with the fat of a good pig and some other stuffs that hurt the body but bring joy into our lives, you’re of a quiet nature, curious though. The choice is yours, the same as Cha Cha in question, very popular by the Aragón band, put in some hot pepper. Besides that you always remember, the chorus of that catchy son by Miguel Matamoros: “the one who plants his sweet corn, needs to eat its pinol*”. So if you’re thinking of having crab, give up this idea, avoiding that your dreams aren’t fulfilled this year we’re just living.

Don’t hesitate not even a second that in this musical cuisine collection, complex relations take place like the previous title, with an unexpected ending and everything else. Where is the link between the mamoncillos and the shrimps by the essential Matamoros, previously referred; the moist okra that slips to the dried yucca, (or it will be to the “ñame”?) by Chapotin and Casimiro’s yucca, the Guayabero’s good friend…? In more current times, the hot dog sauce by Frank Delgado and Buena Fe duet, amen of these two last to worship the pig, the good piggy as a “national mammal”, saving our lives so many times; being witnesses of the recent Christmas day and New Year’s Eve. In short, don’t they say that the only waste of this sacrifice is the shout?

If Cuba and Puerto Rico are of a bird its two wings, of course our Caribbean roots have to share cuisine and music at the same time… let’s remember the exquisite son (or salsa for the ones who prefer this Cuban music commercial variant) very popular in Cuba in the 80’s by Rolando Montero “El Muso” member of the Traditional project from the 50’s and originally sung by El Gran Combo. Phrases like “big avocados like watermelons, cooked green beans, and little bananas to nibble” and a lot of salsa could have been written with the same confidence in Santiago de Cuba, San Juan, I say so…

With a bowl of delicious crackling within reach and the other one busy in holding a beer dressed as a bride, listen to what we have to suggest you. And please, tell us if you remember something else that connects music with the table, in the meantime: bon appetite and have a nice meal, good luck.