Chico and Rita, music and passion in animates cartoons

Cuba is the “Isle of Music”, no doubt about it. Dozens of singers, composers and improvised instrumentalists walk on the streets of any city every day. However there are not so many Cuban artistic expressions that the music shares its main role with other arts, like for instance the theater, with the disappearance of the so called and praised “Musical Theater” on Consulado in Havana, it was closed in a time and it was never opened again not even the movies.

Of course, there was in the movies made before the Revolution (let’s clear that we refer to the feature film and fiction) some musical films in which songs from famous composers at that time were sung like Lecuona or Roig, and they served as a take – off or consolidation of careers of singers and actresses like Rita Montaner or María de los Ángeles Santana.

From the movies made after 1959 under Art and Film Cuban Institute (ICAIC), just a few examples of musical can be mentioned. Maybe one of the most relevant was Un día en el solar (1965) (A day in the barrack yard) directed by Eduardo Manet with the choreography of Alberto Alonso and the music by Tony Taño. In 1982, Patakín by Manuel Octavio Gómez with the choreography work of Víctor Cuellar and music of Rembert Egües that was a hit in the brand new places, being a box office hit and not with so good critics. La Bella del Alhambra, beautiful film by Enrique Pineda Barnet, feted the Cuban theatrical tradition and the local musical. Another precedent in the biographical way, claimed by the critic and the public was Zafiros, locura azul in 1997 directed by Manuel Herrera, which was about one of the most emblematic quartets of the country.

Recently we had news of the screening during the Tobago Jazz Film Festival, held at the beginning of this year, of the animated cartoon Spanish film Chico and Rita, a musical recreation of the epic years in the half of the last century in Cuba, maybe not well tackled from this point of view by the national film. It had the main direction of Fernando Trueba and has a soundtrack of luxury with songs of the legendary piano player and composer Bebo Valdés (the film was dedicated to him). It also recreates jazz and latin jazz songs composed by Chucho Valdés, Chano Pozo, Tito Puente, Thelonious Monk, Charlie Parker, Dizzy Gillespie and Freddy Cole… interesting, isn’t it? We keep telling you about the creators, main cast and the film.

He was a personal friend of Bebo’s. The creator of the rhythm “Batanga” is the piped music of some of his film productions. In 2000 makes the cold from Sweden melt together with his son Chucho in an unforgettable afro-latin jazz discharge filmed in many first levels and camera in hand for his documentary “musical”, he prefers to call it Trueba, Calle 54 (Street 54).

Trueba’s fascination by the figure of Valdés parent also found expression in El milagro de Candeal (2004), emerged according to the filmmaker’s confession, Bebo Valdés’s wish to visit Salvador de Bahía in Brazil, rich cradle of rhythms and African religions. The piano player makes a memorable hand to hand with musicians from the cloud “Candeal”, saved from the violence and slum life thanks to music.

In 2010, Bebo returns to the movies in a way of cartoons to the mythical Havana at the end of the 40s and beginnings of the 50s… everything can be found: mambo, jazz sessions, motley clubs to dance or discharge in the world of the musicians and artists looking for hard “padrinos” or any contract “big ones” to hit the stage and go to Mecca of jazz, or on tour through all the big theatres from Europe. As an impressive backcloth of all the argument, Havana in the middle of the XX century, Havana that a little longer wasn’t unrelated to Fernando Trueba, living and working in it during the period which he taught classes at The International School for Film of San Antonio de los Baños.

Love and Music in “cartoons”

Synopsis: Chico is a young piano player with big dreams. Rita a wonderful singer of an amazing voice. They’re united by passion and music, but in this journey as it happens in the boleros, anguish and torture await.

If the synopsis seems the same to any other melodrama of that time, well you’re right. It’s a love, friendship and betrayal story.

Fernando Trueba got the help of the 1999 Design National Award Javier Mariscal for the drawings of all the characters and the impressive recreation of Havana at the end of 40s. The animation style is retro, no third dimensions or “Pixar” effects, just the one the story and time deserve. The filmmakers travelled to Havana to photograph the streets and buildings and to search for the heritage files when the hard decadency made impossible the rebuilding of the streets. The wardrobe, the newspapers, the street ads, bars, clubs… all was recreated in the film in detail.

Trueba gave the leading roles; they’re three, Chico, Rita and Ramón, friend of Chico’s and his counselor in the voices of Eman Xor Oña, Limara Meneses and Mario Guerra. The performance of this last is laudable, because of his naturalness. For the singing parts of the two main characters, voices of similar musical register were found in the actors like Idania Valdés as Rita and Bebo Valdés himself like Chico. 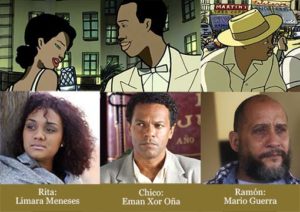 Main characters of the film

The film, labeled by Andrea G. Bermejo (Cinemanía Magazine) as a film like “The Casablanca of the animation film”, it has received a great amount of awards, among them: Goya, for the best film (2010), nominated to the Oscars for best feature film in 2011, best European award for feature film in 2011, FNAC award at the Annecy Festival to the best film feature, nominated for the best film in the Annie Awards and in the same year it was awarded by two Gaudí awards for best animated film and original soundtrack.

The amazing is with so many awards and having an essential theme of the culture of the island, the film hasn’t been played in the regular circuit of films (it had a unique production at the number 32 Latin-American Film Festival) not even on the Cuban television… the reasons? They can be so many…