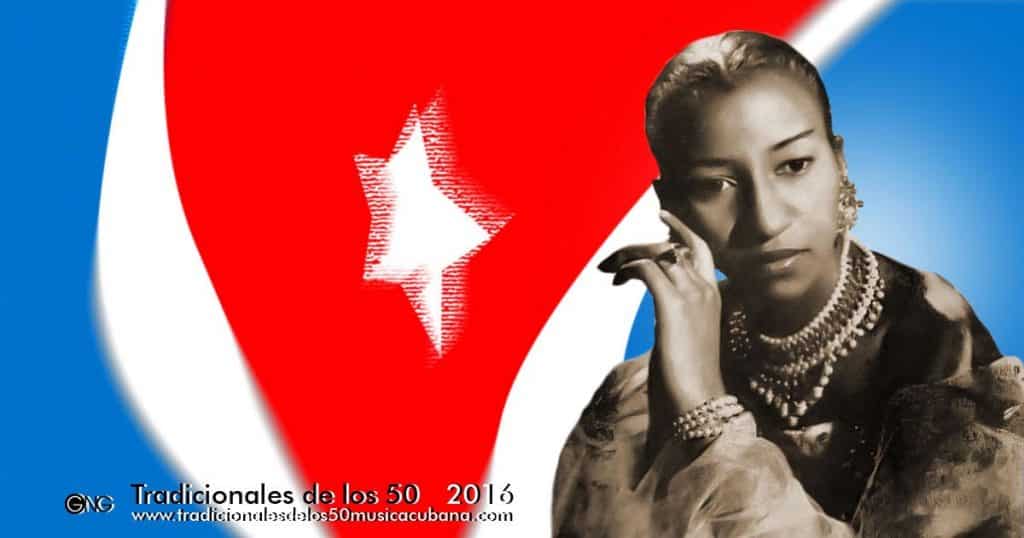 Few times an artist has raised so many passions in and out of Cuba like Celia Cruz, now she’s come out again due to the controversial serie that has caused divisions among the ones who met her personally and the producers of itself, determined, according to the first, to show a simple and sweetening image about the really one, no question at all one of the most relevant Cuban personalities from the XX century. Even president Obama in his speech, mentioned Celia among the most renowned Cuban musicians. The journalist Michel Hernández brings to our page a nice issue of the artist, which Tradicionales de los 50 makes a permanent tribute in every one of its shows.

A friend says when Celia Cruz shouted Sugar! (Azúcar), the singer shook and shook also the world spinning beneath her feet. Salsa sweetest phrase wasn’t more than the prime fire of the hip revolution, fever bodies, from dramatic and attractive passions which took the floor when the queen went down to the stage and began to perform her dictates on the dancers. They, simple mortals, knew with certainty that it was impossible to be resisted to this spurt of Caribbean rhythms and they were led by the loud gale extended on all and each one of them, she took them by the waist, she set fire on their heads and later she threw them to the floor, already changed into an impetuous paradise of sweat, joy and frenzy.

Celia changed with Tito Puente the face of “Salsa” music

There was no one who resisted the charm and the tropical and Caribbean voice of this singer who lived a life full of material for the legend. She was born in October, 1925 in Havana, where she stood out like a very promising singer with the Sonora Matancera at the end of the 50’s, she went out of Cuba because of a contract to perform in Mexico, she changed with Tito Puente the face of the salsa in New York and put the entire city into dancing with the rhythmical hit of the son montuno, the Cha Cha or the mambo; she performed in Zaire before the historic fight between the boxers Muhammad Ali and George Foreman in 1974, got a Grammy and the star in the hall of fame in Hollywood, and she was the most international personality of popular Cuban music of all times.

Being, she was one of the iconic personalities of the band Fania All Star, a project led by the musician Johnny Pacheco and the entrepreneur and producer Jerry Masucci, with the goal to spread the Latin music in the USA. The band, founded in New York in 1968, lived one of its most memorable moments in a concert at the Yankee stadium, which gave birth to a CD that takes the lead, mainly “Bemba Colorá”, one of the biggest themes of Celia Cruz’s repertoire. So far (we spoke in the mid 70’s), salsa wasn’t only a Cuban heritage, also an international phenomenon and the world gave thanks to that.

Her records are an invitation to free the hips, although, we have to say everything, the singer breathes nostalgia for her homeland on them as well. They are more than 70 published albums during 40 year artistic career, a mixture of stylized salsa, son, and Cuban and Latin rhythms with universal atmospheres. There are songs in her repertoire that were taken as anthems, for the musicians living abroad, as the ones living in the Caribbean country. It’s true: the singer left the island in the early 60’s but never left entirely, because her voice kept listened by many Cubans in the silence of their houses or in the family parties’ joy, sometimes in a very low tone, sometimes in a louder one.

Many danced, like holding their hearts in their hands, at the beat of legends like Burundanga, La vida es un carnaval, Quimbara or Yerbero Moderno. Today on the island media, references to her memorable interpretations are listened, if one deepens in the local programs, you can take a surprise and grab a dance, like the big dancers say, at the beat of famous chorus like Songo le dió a Borondongo, /Borondongo le dió a Bernabé, /Bernabé le echo a Burundanga/que hincha los pies.

Actually the singer had a power of audience, so any artist would kill. She performed on the stages of half world and gathered thousands of people, dancers or not, attracted by the curiosity to see live a popular music living myth or attending a concert of her own was certainly a unique moment.

In 2003, the so called “Guarachera de Cuba”, passed away due to a brain tumor and the city of New York gave her a farewell as she deserved: The Cuban music was listened loudly and her corpse was taken in a carriage thrown by white horses through the streets so her fans could give a last good bye to the singer with more sugar of the Cuban music.