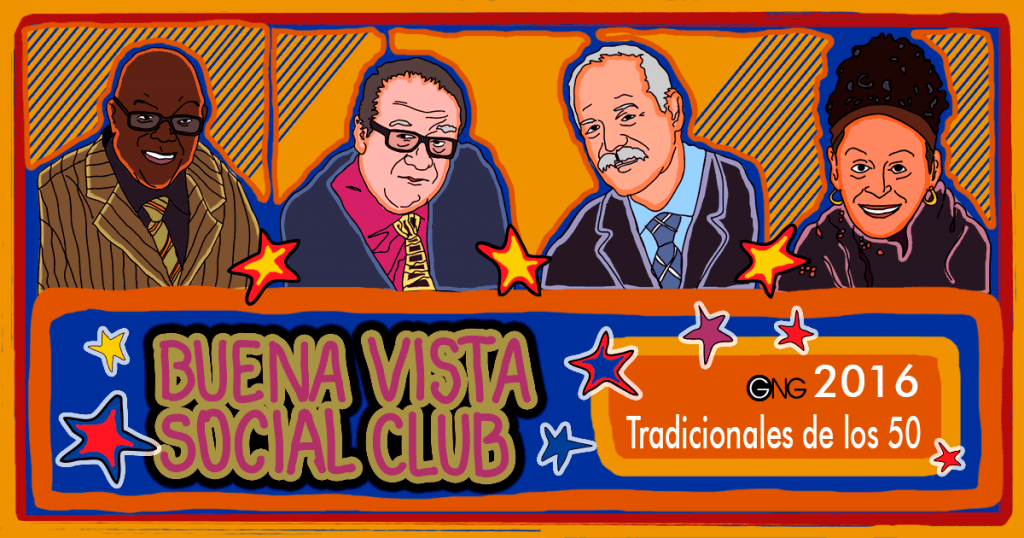 Its great impact to a global level since the beginnings in 1996 made Cuba to become in the target of journalists, scriptwriters, moviemakers, photographers, musicians and researchers again, who come from everywhere of the Orb to the island with a same purpose, its music.

Devoted artists like Compay Segundo, Ibrahim Ferrer, Pío Leyva, José Antonio Rodríguez (Maceo), Raúl Planas, Omara Portuondo (The Buena Vista Star) and Eliades Ochoa together with important musicians like guajiro Mirabal, Orlando López (Cachaíto), Javier Zalba, Rubén González and Miguel Angá pulled the trigger of this musical phenomenon, that would begin to spread like wildfire becoming into one of the most outstanding musical phenomenon of the last century.

From the alliance of these two great Cuban stave musicians came up, after some recording sessions at the Areito estudios from EGREM, three invaluable compilations: A toda Cuba le gusta, Buena Vista Social Club and Presentando a Rubén González. The second album flooded the covers of important publications and it was praised by the critics, which cost the Latin Grammy in Traditional Music category in 1998. Later the BVSC would be the main character of the homonym documentary directed by Wim Wenders, produced by Ry Cooder and nominated to the Oscar in 2000.

All this drove to the Traditional Cuban Music reborn. Through these two long decades, its productions have been placed on the top of the Billboard lists with songs like the Chan Chan, El cuarto de Tula, Dos Gardenias, among others, that have won the most prestigious theatres and places, placing the Cuban Music really on top.

An unknown record in Cuba

Particularly I want to highlight the production Rhythms del mundo, (Artists’ Project Earth, APE) on sale in 2006, but it still remains to be discovered in Cuba. How the link of the BVSC, together with artists of a great stature like Sting, Dido, Maroon 5, U2, Quincy Jones or Radiohead caught on and attracted the attention.

Colossal cloud of dust provoked to the attentive, the special repertoire worked for the record, because these artists were in their elements, working with unknown forms like the Cuban son, the bolero and what about Arctic Monkeys who wore the dancing shoes (Dancing Shoes) and danced to the conga rhythm.

Thank goodness the Casablanca version in voices like Ibrahim Ferrer and Omara, Fragilidad by Sting, the new Clocks by Coldplay and the interpretations of Vania Borges, El Lele, Coco Freeman and Idania Valdés. Of course this album made an unparalleled hit.

A prophet is without honour in his own country?

The success of BVSC has allowed the visibility of other bands like Traditionals of the fifities, among its guests, artists have stood out who took part the ranks of the BVSC, of the Septeto Santiaguero and Quartet Patria, led by Eliades Ochoa.

Yet, in these twenty years, a concert never performed in Cuba attracts the attention but the usual perform held in Habana Café at The Meliá Cohíba Hotel from September 2014 not even its records are on the market.

Nevertheless, in a press conference last year due to the international tour to say good bye to the stages, some of its members made sure that the mythical band would end its journey with big concerts at Karl Marx Theater in Havana, for the Cuban people. Everything we are and we have accomplished as artists is owed to this project, have said the members of the Buena Vista Social Club in more than one occasion, “everything come up from here, made us the emissaries of our culture and in such a way to promote the taste for the Cuban music around the world”.