Barbarito Diez: The Voice that did the Danzón a Credit 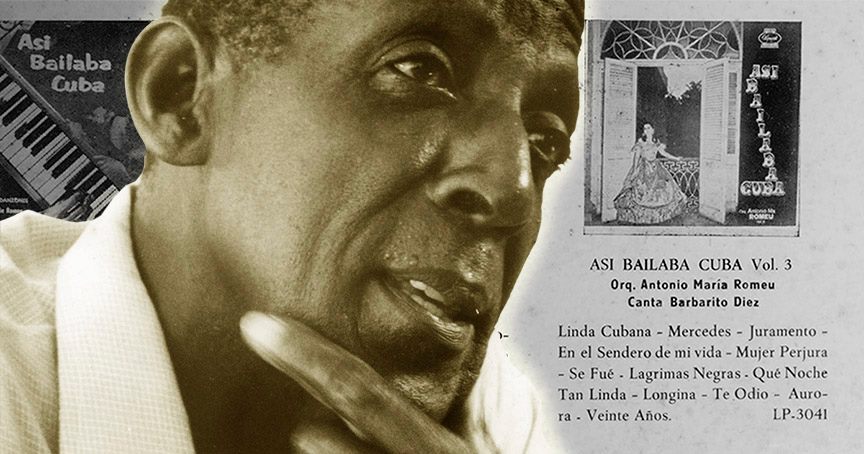 To those people who are over 70 years old and they’re avid to the Cuban music, above all to danzón dance, Barbarito Diez represents a legend that makes us blue, and it returns a good amount of happy moments of his youth. What we go around fifties although we didn’t get to enjoy the splendor of his voice we did see him sing and we are touched by a respect to his voice so clean, balanced and at the same time able to transmit multiple emotions.

I think that in the history of our music, just a few singers with so peculiar style like his can be found, that incomparable elegance that was mingling itself among the voice and the gestures, they transformed his interpretations into a lecture, in lovely moments of seduction. From his almost still position he won the public during six decades.

Although he was born in Bolondron (Matanzas) in 1909, when he was 4, his family moved to Manati in Las Tunas province. He arrived in Havana in 1930 and in 1931 he began his professional career at Vista Alegre Café. In 1937 a meeting in his life is produced this made a change in his artistic career; I mean his relation with the pianist and composer Antonio Maria Romeu, he put him in his band and joins this pearl’s destiny with the Danzón (our national dance), rhythm that officially arose in 1879, in Matanzas city, he knew to assimilate the best of the Cuban sonorities: the son and the habanera or traditional dance.

Inside Romeu’s band he reaches a remarkable popularity among all the true people of the danzón, being qualified in a short term as the “Golden Voice” of that form, in fact it turns interesting to remember how well his style fit with the nature and demands of the rhythm created by Miguel Failde.

That stage has a key moment at the time his voice reaches the radio, at the end of the 30’s with Romeu’s band. It can’t be forgotten from that experience those extraordinary LP’s arose under the name of “Asi bailaba Cuba”, (That’s the way that Cuba danced), where the singer made an enviable repertoire of great Cuban songs from composers like Eliseo Grenet, Ernesto Lecuona, Sindo Garay, Manuel Corona, Moises Simons, Maria Teresa Vera, Miguel Matamoros, Luis Casas Romero, Felix B. Caignet and Eduardo Sánchez, leaving the compositions ready for the dancers please. These songs were enriched by his performance.

The relation of Barbarito with Antonio Maria Romeu was marked by a mutual admiration, the singer used to tell: «Once the maestro Romeu couldn’t write a danzón that was announced to be sung at the scheduled party, so when he came to the dance and in one of the aisles of the building where it would be held, he wrote two parts of the song, he indicated the musicians to play it and besides he said to wait for his signal to interrupt the performance of the written part because he would alone on the piano, improvising. Noticing that virtue, the audience who were dancing stopped and surrounded the pianist, enjoying the sounds coming out from those hands».

The music that doesn’t die…

I’ve enjoyed the privilege to have in my hands, in some occasions, those records from the just mentioned collection “Asi bailaba Cuba”, in and out the island, because some Cuban people wherever they are, continue listening to those interpretations of songs like: Olvido, Lagrimas Negras, Las Perlas de tu boca, Mujer Perjura, Tres lindas cubanas, Capullito de Alheli and Ausencia, among others.

“The King of Danzón” made tours through this continent with remarkable success, where his link to Rondalla Venezolana in the 80’s was important directed by Luis Arismendi, where he immortalized his version of Caballo Viejo, original from the Venezuelan composer Simon Diaz. Barbarito’s greatness is understood better when we listen in the voice of other singers songs that he made a hit, his singing way was so extraordinary that the comparison results so inevitable.

His loyalty to this such dancing form didn’t permit that fashions dragged him to other ways although more than twenty years of his death count, in 1995, he’s still present and admired in some generations of Cuban people, above all among those who make possible that the danzón never dies.